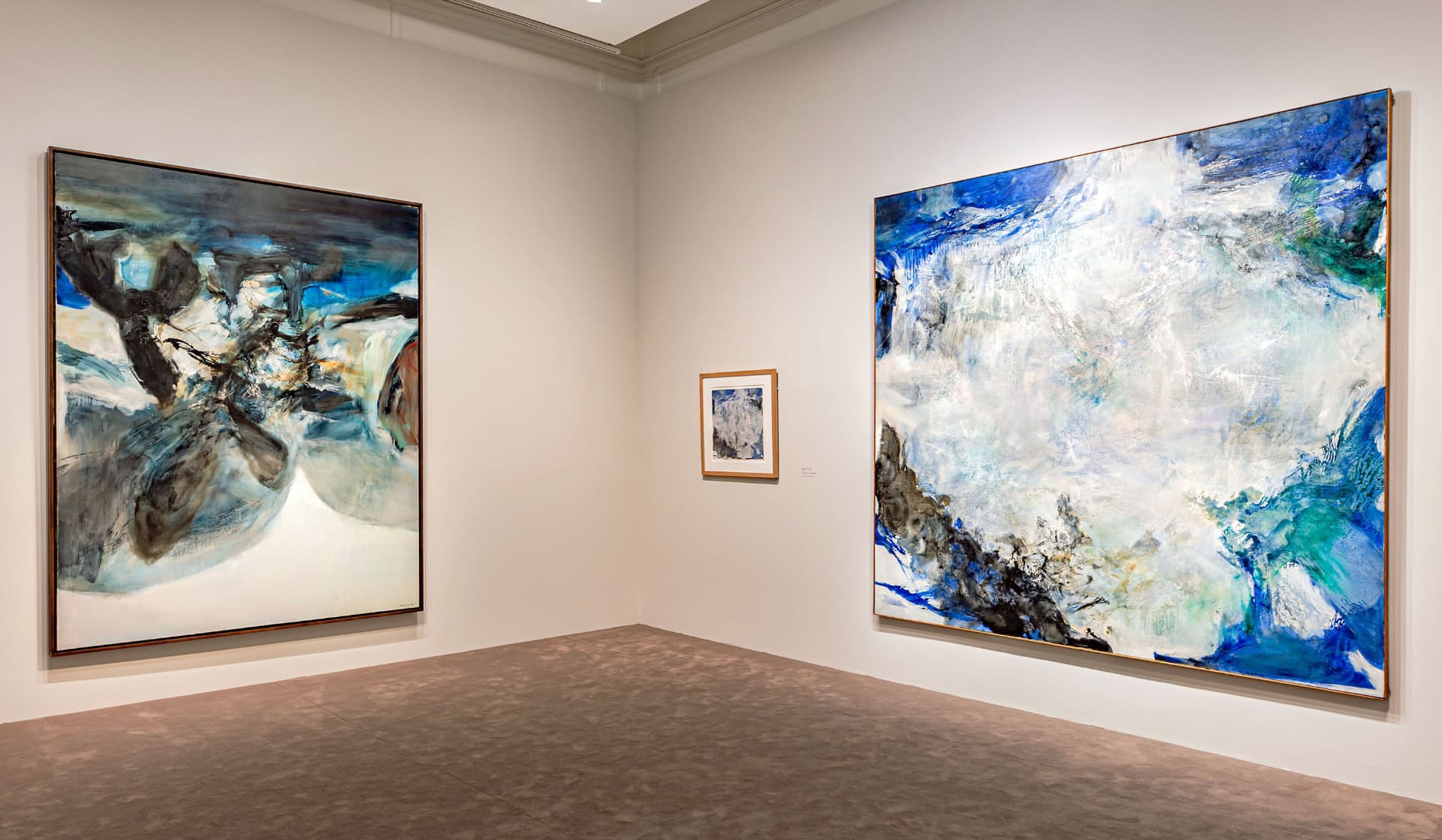 Initially scheduled for April 29th, the monographic exhibition « Zao Wou-Ki. Il ne fait jamais nuit » (Zao Wou-Ki – It never gets dark) will be allowed to open on May 19th. It is the first solo exhibition of Zao Wou-Ki’s works in Aix-en-Provence since the one that had been organized in 1991 at the Vasarely Foundation.
Developed in collaboration with the Zao Wou-Ki Foundation, this exhibition includes some 80 works – oils on canvas, watercolors and Indian inks on paper coming from public and private collections – and spans the period 1935 to 2009 retracing the path of the artist. Besides this retrospective vision, both curators, Erik Verhagen and Yann Hendgen, have structured the presentation of the works to enhance the artist’s work on light. The way he used and treated it has deeply modified his way of painting and his conception of space. Sometimes dramatic, sometimes flooding, light is indeed inextricably linked to space in his work and enables the artist to ‘make visible’ what cannot be seen and which inhabits his painting, ‘the space from the inside’. 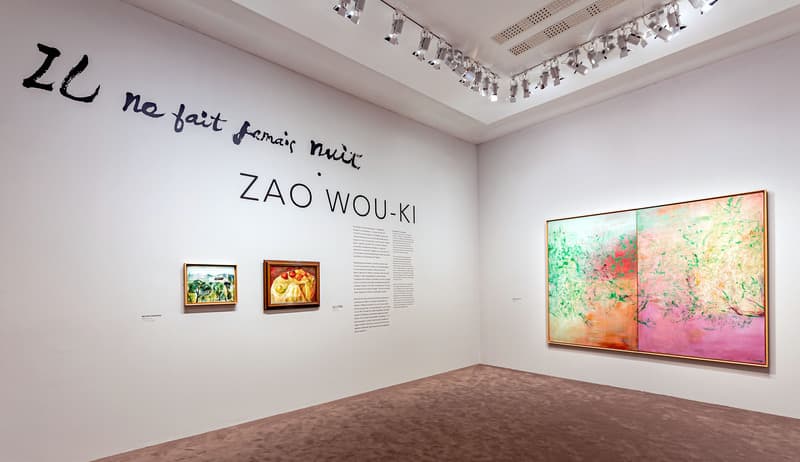 The first works of the artist, painted in China, very clearly evidence the influence of Paul Cezanne, the master from Aix-en-Provence, whose paintings Zao Wou-Ki had studied from pictures and reproductions. These early Chinese works movingly resonate in a large diptych painted in 2005, Hommage à Paul Cézanne (Homage to Paul Cezanne), exhibited for the first time. The artist revisits the motif of the Montagne Sainte-Victoire and highlights the constant link with Paul Cezanne’s work that accompanied him during his whole life.

Many of these works, never shown or rarely exhibited, punctuate the exhibition. The pages of Zao Wou-Ki’s travel sketch books painted in situ in the Savoyard Alps during the summer of 1950 are exceptional witnesses of the outdoor sketching of the time. They will become a source of inspiration for the paintings executed later on in the secret of his studio. 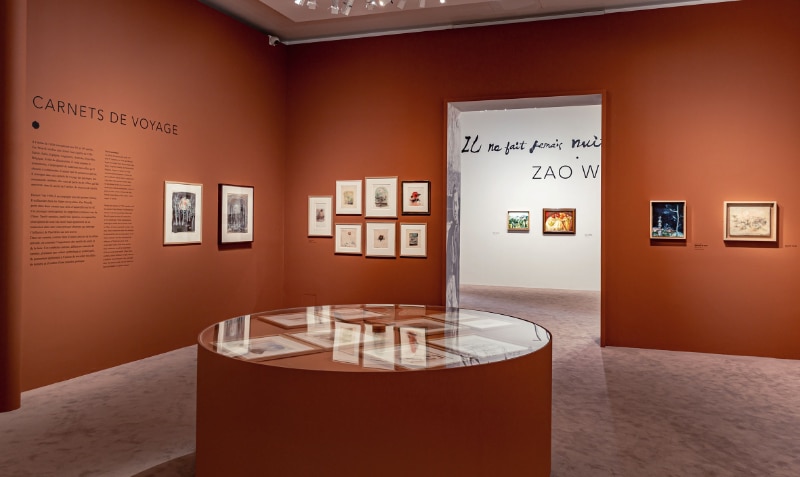 Room 2 – Travel sketch books. © Culturespaces / Eric Spiller
The Bertrand Museum in Chateauroux (France) and the Ingres-Bourdelle Museum in Montauban (France) have both accepted to lend two large paintings dated 1971 and 1973. These two works with their dense composition and highly gestural strength have never been exhibited alongside each other since they have been presented during the 1970s at the Galerie de France in Paris. They have been bought very quickly one after the other by these two museums at the beginning of the 1980s, thus evidencing the dynamism of so-called ‘provincial’ collections. 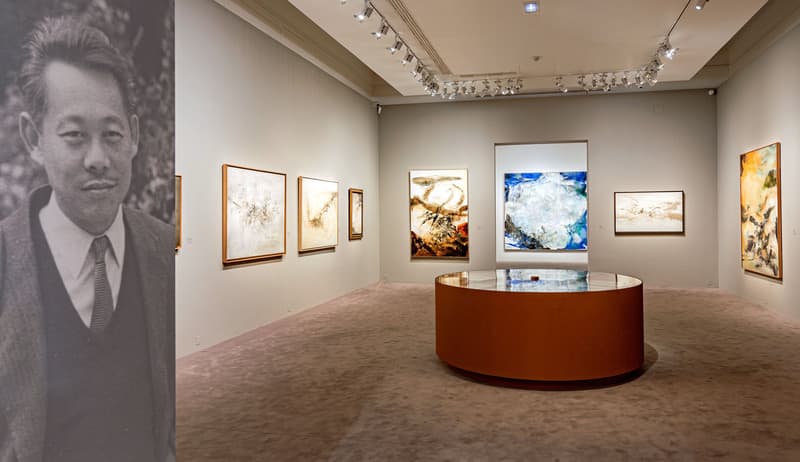 Meanwhile, the Museum of Fine Arts in Orleans (France) has lent its large composition entitled 03.12.74 (250 x 260 cm) exhibited for the first time next to a watercolor dated that same year which enhances the deep links between the various techniques used by the artist. The return to the technique of Indian ink at the very beginning of the 1970s has drastically changed the relationship the artist had with space : here the void is in central position and the designs are relegated in the corners and on the edges. This re-discovery of the importance of the void is a new step towards the acceptance by the artist of his Chinese roots. 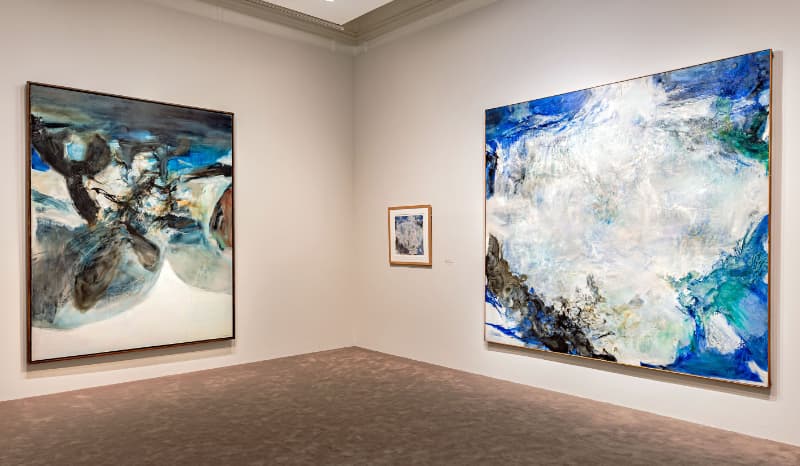 Room 3 – 1970’s. © Culturespaces / Eric Spiller
The 1980s and 1990s confirm the evolution of both his palette and his technique. Enjoying a more stable personal life and taking advantage of his large studio in the country, Zao Wou-Ki can give free rein to his craving for large formats and to his love of bright colors. In his other studio in Ibiza built by his friend the Catalan architect Jose Luis Sert, Zao Wou-Ki immerses himself in the colors and in the light of the Mediterranean. 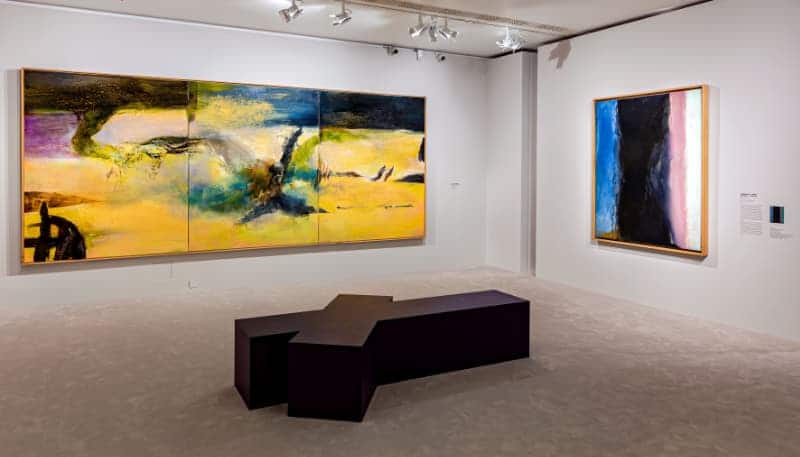 Room 5 – 1980-90’s. © Culturespaces / Eric Spiller
The Indian Ink Room allows us to grasp the evolution of his work in black ink on paper which he re-discovers thanks to Henri Michaux around 1970. The abstract inks of the 1980s and 1990s are presented together with a large painting dated 1983 : a search for fluidity, the importance of the void, a Chinese inspiration, they are all perceptible here in both techniques. As far the inks of the 2000s are concerned they show a growing connection with nature. 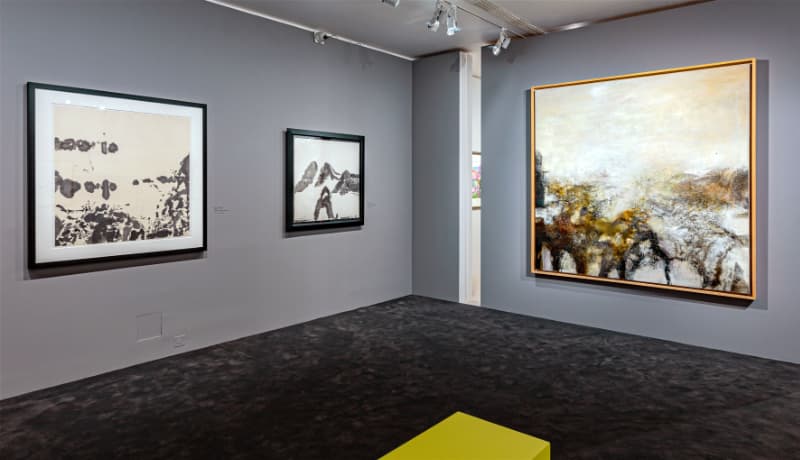 Room 6 – Inks. © Culturespaces / Eric Spiller
One of the Rooms is dedicated to watercolors realized during the summers of 2008 and 2009 at La Cavalerie, the estate of Emmanuel Ungaro, a longtime friend. These watercolors evidence a drastic change for the artist: since 2007, he has accepted to come out of his studio of paint watercolors in the open, on a trestle, facing nature. These watercolors, facing the hills of the Luberon or the typical vegetation of the south of France, reveal a new facet of his creation. 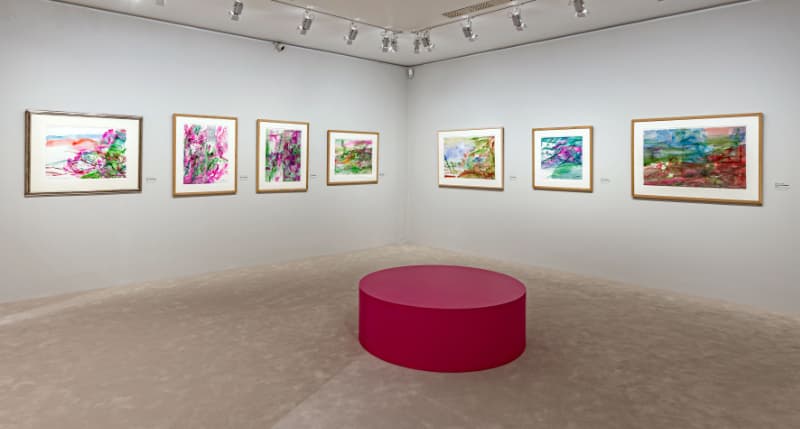 Room 7 – Watercolors. © Culturespaces / Eric Spiller
The last Room of the exhibition presents works executed between 2003 and 2009. Ciel (Sky), a large painting 2.50 m high painted in his Parisian studio between the end of 2003 and the beginning of 2004 and a gorgeous watercolor also painted in Paris in January of 2009 evidence Zao Wou-Ki’s exceptional talent as a colorist. These chromatic explosions, far from the winter greyness of Paris, show the whole inner richness of the artist who no longer needs a reason or a pretext to unleash his joy of painting, again and again. 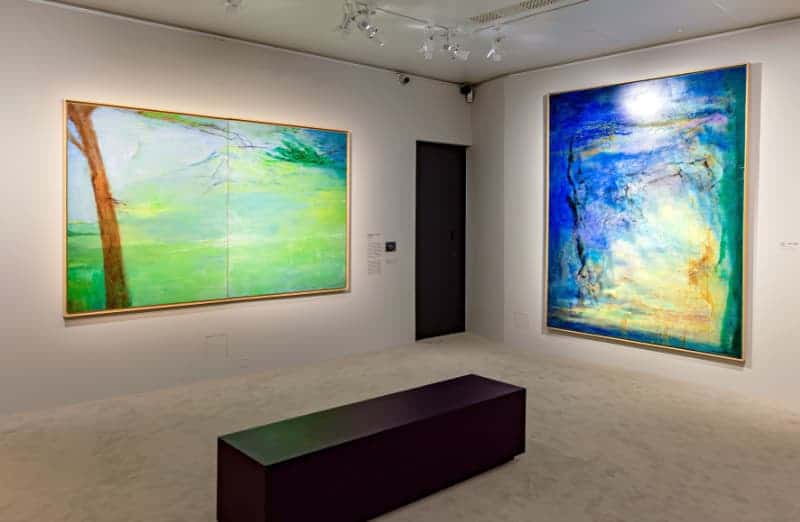 Salle 8 – Années 2000. © Culturespaces / Eric Spiller
The exhibition is accompanied by a richly illustrated catalogue published by the Editions In Fine. It includes a text by Dominique de Villepin about the links between Zao Wou-Ki and Paul Cezanne together with other texts by the two curators of the exhibition, Erik Verhagen about the circumstances of the creation of the paintings of the 1970s and Yann Hendgen about the impact on his works of the many travels made by Zao Wou-Ki.