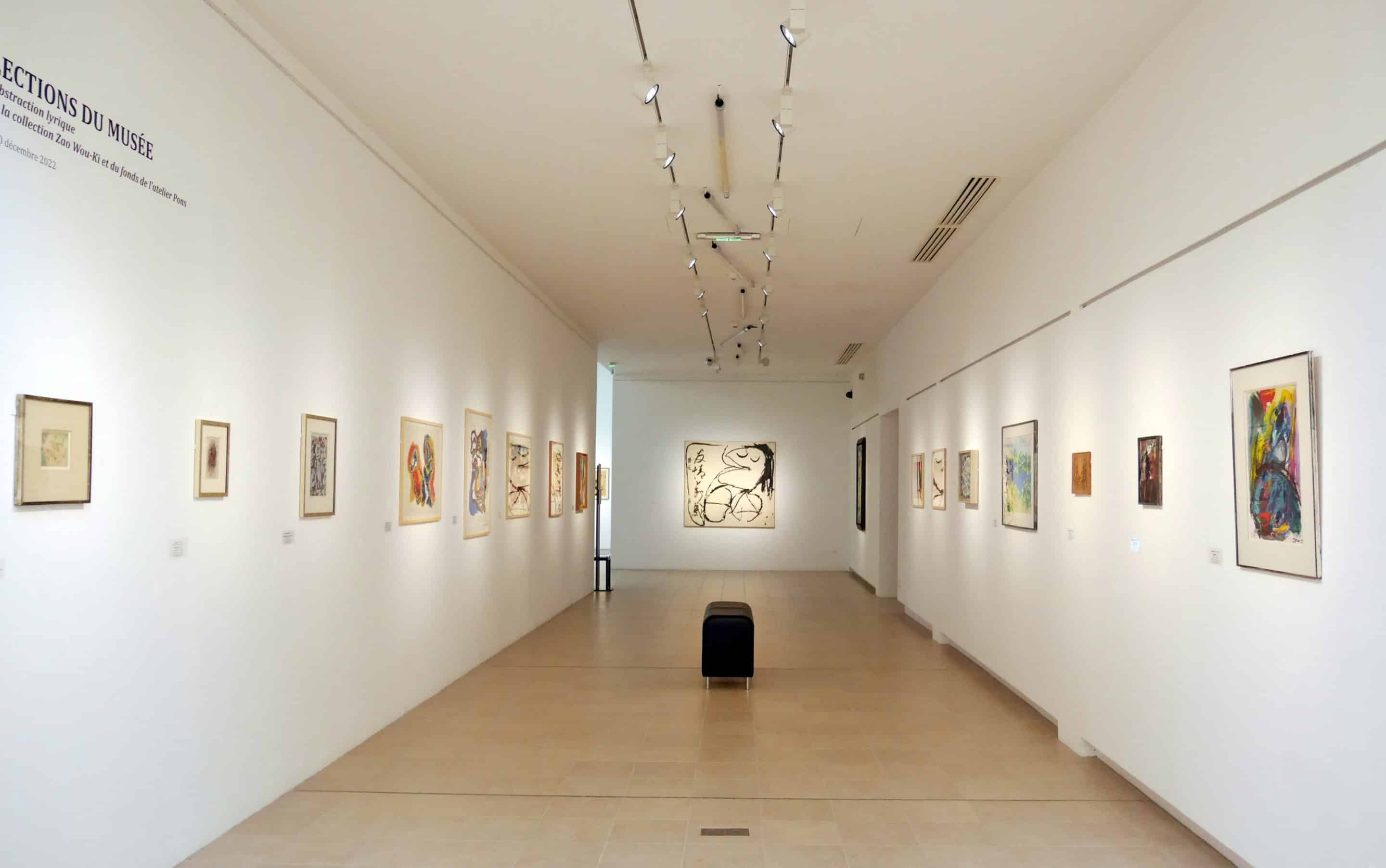 From June 4th to December 30th 2022, the Musée de l’Hospice Saint-Roch in Issoudun presents a new temporary exhibition entitled Collections du musée: Cobra et abstraction lyrique (Museum collections: Cobra and lyrical abstraction). In line with its intention to continue the thematic focus of the exhibition Vibrations de la nature (Vibrations of Nature), dedicated to the abstract painter Pierre Wemaëre (1913 – 2010), the museum presents an exhibition devoted to the avant-garde movements, highlighting the studio collection of Jean Pons, purchased in 2011, and the Zao Wou-Ki collection, donated in full by his wife Françoise Marquet-Zao in 2015.

Founded towards the end of the 1940s in Paris, the CoBrA movement aspires to a renewed plastic language, free from constraints and conventions, claiming the spontaneity of the gesture and the expression of emotions. Believing in the experimentation of materials and shapes, CoBrA is, together with lyrical abstraction, one of the most important avant-garde movements in post-war Paris. With works selected from its rich collection, the museum of Issoudun thus presents in its new exhibition Pierre Alechinsky, Asger Jorn, Alfred Manessier, but also Wols. Two works by Zao Wou-Ki – a loan from a private collection to the museum of Issoudun – are also exhibited here in the room dedicated to lyrical abstraction. Alongside Joan Mitchell, Jean-Paul Riopelle or Henri Michaux, Zao Wou-Ki is presented among his friends, with whom he shared a mutual feeling of admiration.

Link to our article on the 2016 exhibition

Celebrating nearly seventy years of acquisitions, the Musée Cernuschi à Paris presents for the first time, from October 21st 2022 to February 19th 2023, an exhibition devoted exclusively to its collections of modern and contemporaneous Chinese ink paintings. Entitled L’encre en mouvement. Une histoire de la peinture chinoise au XXème siècle (Ink in motion. A history of Chinese painting in the 20th Century), it highlights the way this traditional painting has evolved throughout the 20th Century, echoing the profound changes upsetting China at the time. 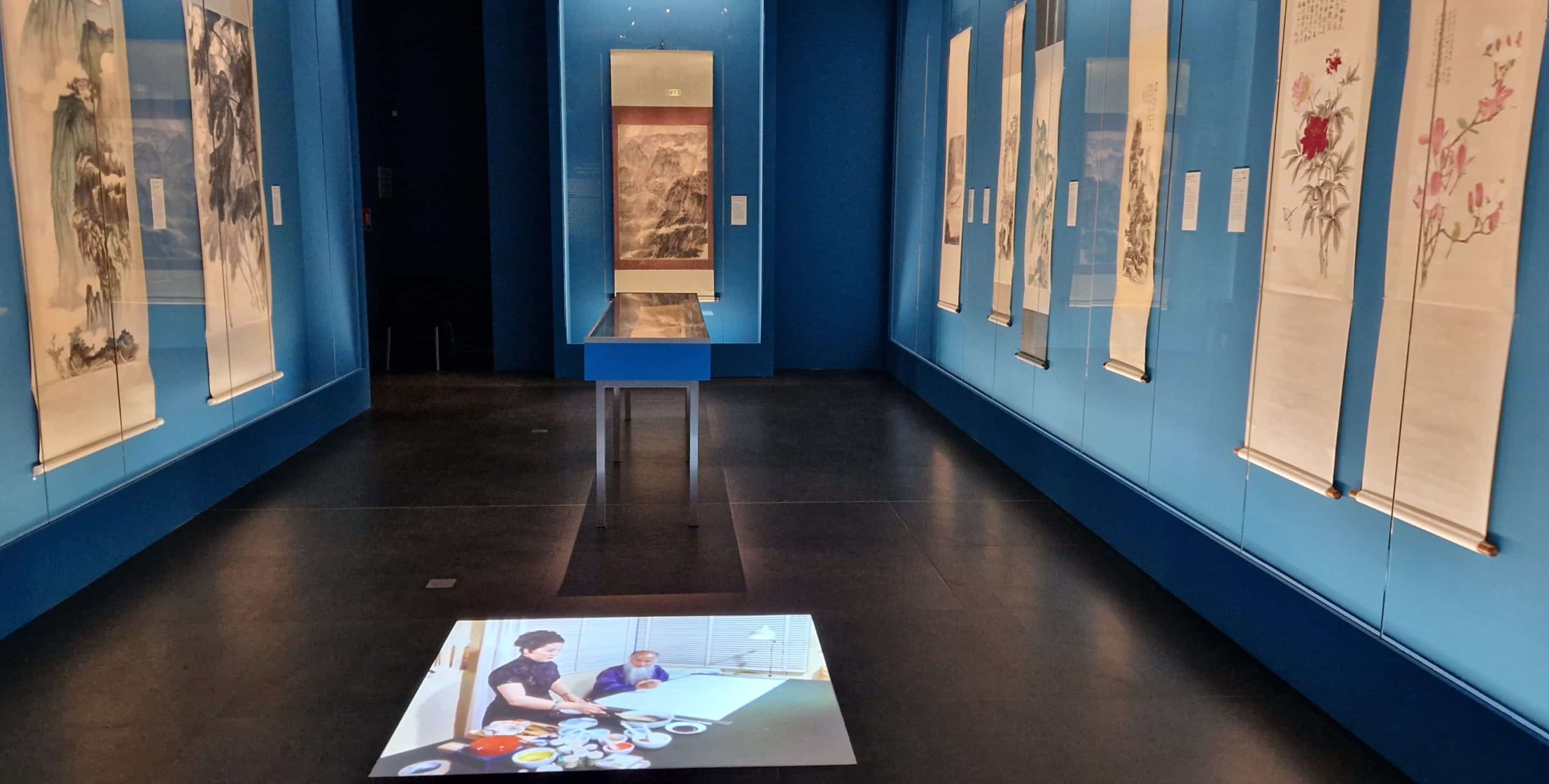 Starting with the ‘Primeval sources of the line’ towards the ‘New avant-gardes’, the route develops according to eight themes and includes the works of over thirty artists. Punctuated with filmed archives revealing the gestural issues of this technique, the exhibition highlights the changes that occurred in the 20th Century due to the encounter with oil painting or with photography and also to the cultural exchange leading to the questioning and redefining of national painting, be it on an artistic or political level. They therefore present the great figures of ink painting such as Zhang Daqian, Walasse Ting or Zao Wou-Ki, together with contemporaneous painters, active in China, such as Qi Baishi or Fu Baoshi.

It is in the chapter entitled ‘Vers l’abstraction’ (Towards abstraction) that two inks by Zao Wou-Ki are exhibited (Sans titre – Untitled, 1972, 62.8 x 66.5 cm and Sans titre – Untitled, 1989, 104 x 107.2 cm, donated by Françoise Marquet in 2016), alongside works by Chu Teh Chun, Wu Guanzhong or Walasse Ting. Because of the profound changes that characterize his work due to the meeting of European and American arts, Zao Wou-Ki perfectly evidences the contribution of cultural and intergenerational exchanges that the Museum wishes to highlight. 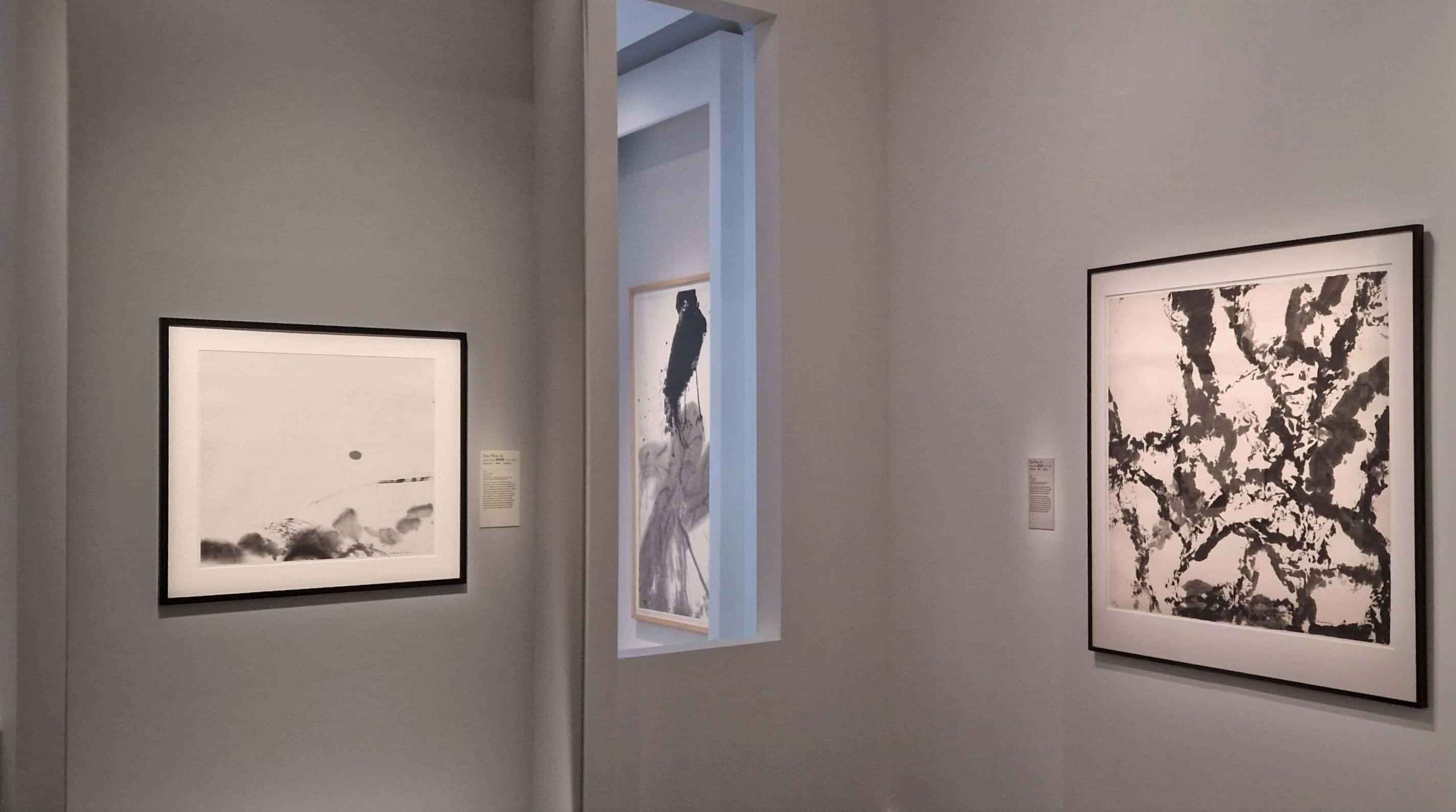 Room 7 of the exhibition of inks at the Musée Cernuschi in Paris: two inks by Zao Wou-Ki, one ink by Walasse Ting. Photo YH. All rights reserved.

The exhibition of Zao Wou-Ki’s works at the Musée Cernuschi is especially important for the Foundation. Actually, in 1946, while he is still living in China, a selection of some twenty of his works are presented at the Museum at the initiative of Vadime Elisseeff, who was at the time the cultural attaché of the French Embassy in China. Seventy years later, thanks to Françoise Marquet’s donation in 2016, the Museum is offered Zao Wou-Ki’s collection of objects and artefacts from the Shang to Qing periods, together with works from Chinese artists that also belonged to him. The exhibition of his ink in this temporary exhibition thus evidences the special link existing between Zao Wou-Ki and the Musée Cernuschi and further highlights the major importance of his work in the evolution of contemporary Chinese painting. 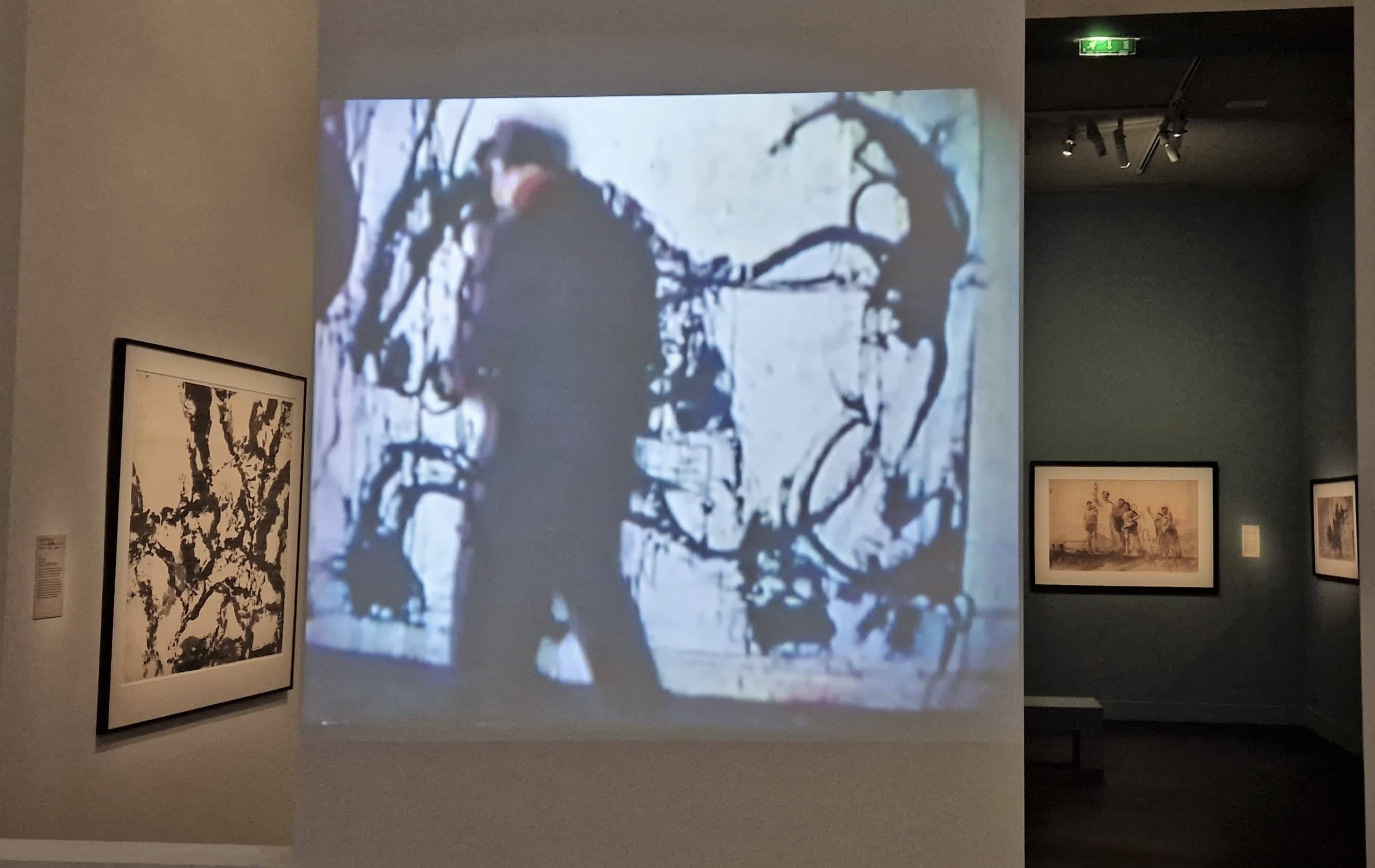 Last room of the exhibition at the Musée Cernuschi in Paris: one ink by Zao Wou-Ki, inks from Mao’s period and one vidéo film showing Walasse Ting painting. Photo YH. All rights reserved.

Link to our article on the 2016 exhibition

The British Museum presents a new temporary exhibition from 27 October 2022 until 17 September 2023 called « Artists Making Books. Poetry to Politics ». Showcased in The Albukhary Foundation Gallery of the Islamic World, which displays objects and works of art from the 17th Century to the present day in the Islamic World (from West Africa to Southeast Asia), this exhibition aims to demonstrate the particular history of artists exploring the medium of books. 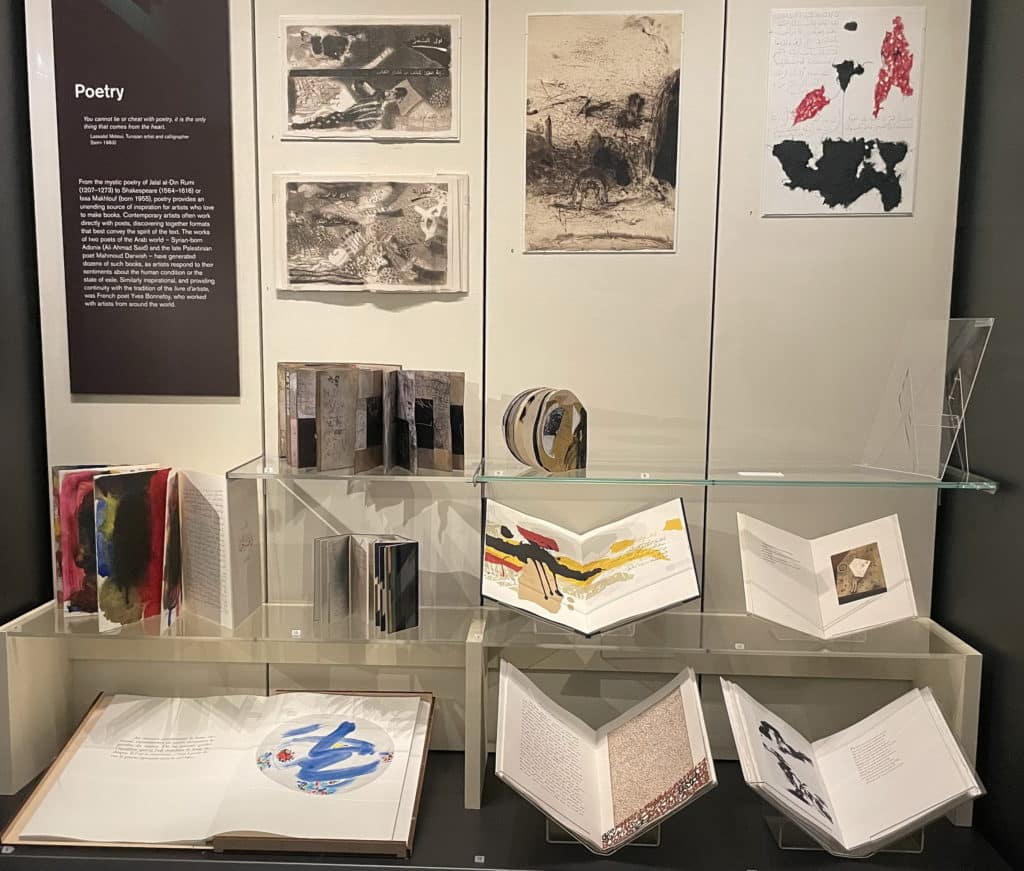 Artists from the 20th Century have indeed appropriated the form of the book, modifying its shape and size as well as its editing process. Turning into a real new form of expression, it became the meeting place for visual artists and poets. In the exhibition are thus displayed works like La Souris by Shafic Abboud (1954, purchased in 2015) or Every Day, an artist book from Kareem Risan (2005, purchased in 2006) ; as well as the two books offered by Françoise Marquet Zao in 2021: Le Livre réfléchi (Well-considered book), written by Pierre Lecuire and illustrated by Zao Wou-Ki (1987) ; and Vingt-quatre premiers sonnets de Shakespeare (The twenty-four first sonnets of Shakespeare), translated by Yves Bonnefoy and illustrated by Zao Wou-Ki (1994). 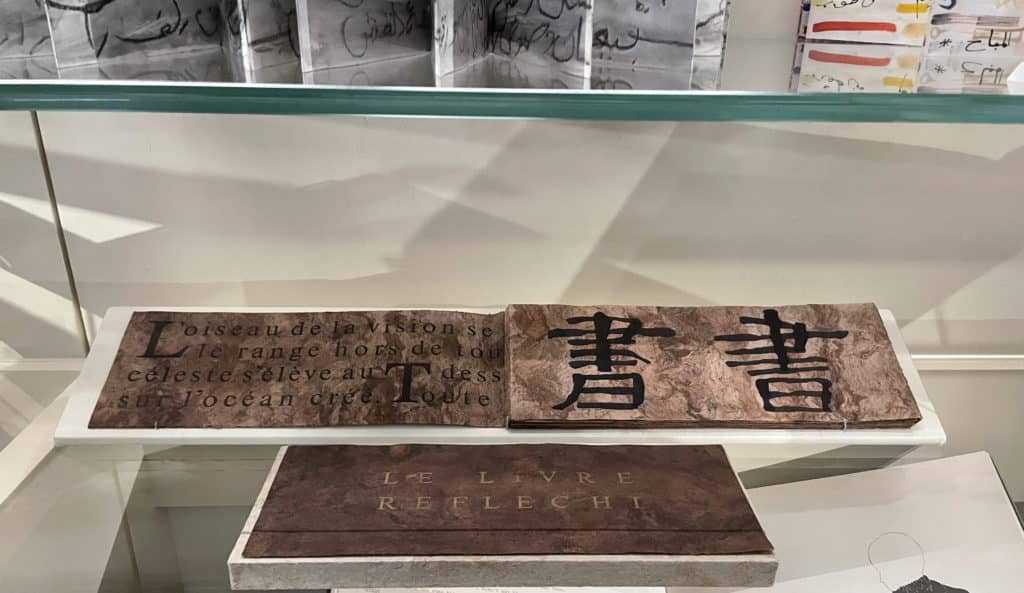 Having forged life-long friendships with writers and poets (Henri Michaux, André Malraux, François Cheng) and being himself an avid reader, Zao Wou-Ki started collaborating on the creation of books in his early years in Paris. This allowed him to explore new techniques such as lithography or engravings, but also to meet many actors of the French artistic life, his work being thus perfectly in line with the objective of cultural exchange promoted by the present exhibition.